“Girls, we are going to have a sit-up contest. I want you to go home and at some point before our next practice I want you to see how many sit-ups you can do.  Have your mom or dad count for you and the next time we’re together we’ll see who was able to do the most.”

My daughter, Leah, is nine years old. She started gymnastics when she was six and it was then that I realized I gave birth to a human rubber band. This girl is so flexible I sometimes wonder if she even has any bones!  Not only that, but from her very first class, she began to spend most of her life in an upside down position! She also learned that any counter, railing, couch, bed, chair, etc. can easily be turned into a gymnastics apparatus.

When she was in Kindergarten, she decided to cartwheel all the way from the school to our car. I lost count around 120! The boys used to get so mad at her when , on the spur of the moment, she would flip-flop without first looking behind her, and end up kicking them in the stomach! How many times have I caught her performing gymnastic skills and have had to say, “Leah, you can’t do that there!!”

I have been blessed with four naturally athletic children.  However, Leah, as of now, is the most driven and insane athlete in our family. The sit-up contest? Did she stop at 100? 300? 500? 1000? No, she was determined to win the contest, so she wanted to post a number that she knew the other girls wouldn’t go over. That number, 1111. In fact, she wanted to do more, but I made her stop at this point as it was becoming a little crazy! And, she wondered why her stomach was sore the next day!? 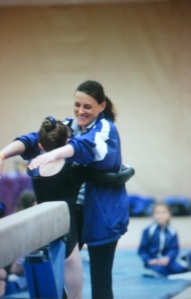 Leah has what it takes to be a great athlete. She is easily coachable and has the talent, dedication, drive, determination, competitive spirit, discipline, and desire to give what it takes to be her best. Never do I put any pressure on her to compete and I always tell her whatever she decides to do with gymnastics or any sport she’s in is fine with me. I will never push her to do or be something she doesn’t want to be. She puts enough pressure on herself that she definitely doesn’t need a mother that’s going to do the same! (Although, I know she could be a great runner – and I sometimes hope she will pick up this “life-long” sport when she gets a little older. Not to mention, gymnastic meets, plus award ceremony’s can get a little long! But, again no pressure!) 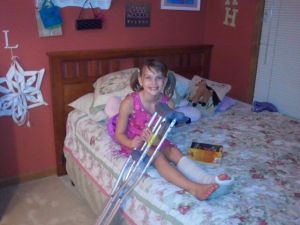 My daughter’s last meet was yesterday. She started off the season falling off the bars and breaking her ankle. She had to work really hard to catch up and was very determined to give each meet her best. My favorite memory from this year was when she was at her second or third meet and she was warming up for the vault. She miss-stepped and ended up running into the vault. She ran the run-way a couple more times but could not get her steps back in order. At that point, I knew it was a mental problem. Finally on her third try, she made it over the vault and ended up doing a great job when it was her time to compete. After the meet she told me, “You know Mom, when I was having so much trouble on the vault, I just prayed and asked God to help me get over it, and He did!” Her words were so sweet, and I love when I get little glimpses that let me know  I just might be doing a good job as a mom!

Way to go Leah for finishing Level 5 with a 5th in State on the floor and the bars and 7th in State All-Around!

Yep, sometimes my inspiration to compete and do my best comes from my 9 year old daughter!

4 thoughts on “My Human Rubber Band”