Last year around this time I was able to talk two of my kids into running a mile race.  At first, they resisted, but when they found out Jay Cutler would also be running the same race they agreed to it. My other two kids were smart enough to realize that even if they didn’t run the mile they would still get the chance to see Cutler and get his autograph. Duh!? The mile wasn’t a prerequisite to meeting Cutler. 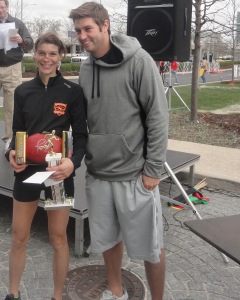 Anyway, the result, they hated running the mile and they would NEVER run another race again. What!? How can you say you hated running? It’s the best thing ever. “Mom, it hurt! It wasn’t fun!” “No, no, you guys don’t understand the hurt, the pain, that’s part of the fun!! C’mon, you gotta be kidding me? How could you NOT think it was awesome!?” “NEVER again Mom! We won’t do it.”

Great! There went my chance at helping my kids develop a love for running. What was I thinking? Starting them off with the mile probably wasn’t the best thing. I should have worked them up to the 1600. Starting with the 100 meters, then the 200, then the 400, 1/2 mile, and then finally the mile. Well, I screwed that up.

So, of course now anytime I run a race that has a kid’s run I’m always trying to talk at least one of my kids into running it. The answer is always, “NO Way!” ” But, I swear, you don’t have to do the mile, you can do one of the shorter fun runs! You’ll love it! I promise!” “Yep, we remember, that’s what you said last time and we DIDN’T love it!”

Okay, so if my kids aren’t going to love running, I’ll just have to work on my neighbor’s child. She’s around our family so much I call her my “adopted child,” and what’s even better, she likes to run. In fact, she’s even asked me if I’d train her for a mile race or a 5k. You bet ya!

Earlier this week, I signed up to run a local 5k, but unfortunately, I’ve been fighting asthmatic bronchitis and it doesn’t want to go away. 5ks and asthmatic bronchitis don’t mix very well, but I had already registered for the race and figured I’d go, maybe pace a friend, and if I was really lucky talk one of my kids into doing the fun run…the kid’s mile or the kid’s 100m dash.

No luck, but my adopted daughter, Emily, was all for it. And because, she was interested in the mile, my two girls, were by NO means, interested in that distance, but decided to try the 100 meter dash. Finally! Finally, at least two of my kids were going to give running another shot!

Emily, did great in the mile! And I was able to run with her, cheering her on and encouraging her to keep going! I was very proud of my (adopted) daughter! She placed third in her age group!

And, then there was Rachael, who stood on the starting line to the 100m race with a determined face to fend off the competition and run her hardest. Well, she won her heat! And she told me, she didn’t even have to run her hardest because she knew she was going to win it. How’s that for confidence!? Go, Rachael!

And Leah, who has told me she will never be a runner because her love is gymnastics, stood at the start, looking more nervous than confident.  But, as soon as it was go time this girl ran! Wow! She ran faster than I’ve seen her run before. So fast in fact, that she blew all the other little girls away and I wouldn’t be surprised if she could also beat her older brothers!  And at the end, what did she say? “That was awesome, so much fun! I want to do it again? Can I do it again! Did you time me? What was my time!”

Needless to say, I was happy, not because they won and I just might happen to have a couple good sprinters on my hands – but because they liked it!! I don’t care if it was just 100 meters they liked it! And now they think running is fun and want to do it again! Awesome! 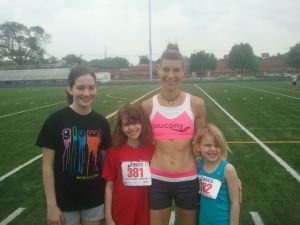 Who knows, maybe next time it will be a 200 meter race, and then a 400, 1/2 mile, and maybe, just maybe, they may ask to try the mile again. If not, that’s okay. I’m just glad that today they enjoyed it! And I feel that the spark has been lit – and you know what they say about sparks…it only takes one spark to start a fire! ( :

If I had known in high school what I could have done with the natural athletic ability I was blessed with, I would have never quit the team, walked off the track, out of the locker room, and into a place I didn’t belong. I think about the running dreams I could have accomplished and it makes me very sad that I threw it all away. But at that point in life, it meant nothing! I certainly didn’t think quitting was that big of deal, and all those goals I had of breaking school records, I didn’t think twice about them.

Well, that’s not necessarily true, there were a couple of times during my high school years that somebody would bring up track, or I’d meet a coach who would ask me if I was a runner, and when I would say, “No,” their response, “Well, you look like you’d be a great runner,” did sting. But, I never let it sting long enough to think, maybe I should get my life back on “track” and become the athlete I was meant to be!

At the end of my senior year in high school I had decided to go to Taylor University. I knew a small, private, Christian school was just what I needed. I wouldn’t have been able to survive at a state school. I was happy to leave my past behind and start with a new beginning. I loved Taylor!

During my senior year, I was working out at the student health club and I noticed a flyer for the Indianapolis half-marathon. I thought to myself, “Hmmm…I used to be a runner, I bet I could start running again and do a half-marathon.” Plus, it would be great motivation to stop smoking (a habit I had picked up in high-school and still happened to do on occasion.)

After a couple of weeks of running on the treadmill, I told my roommate, Heather Beck, my plan. She was actually on the Taylor track team. One day when she was getting ready to go to practice she told me I should come with her and run with the team. There was no way I was going to do that. I certainly couldn’t keep up with the long distance runners. I mean, I had just started running again, not to mention I used to run 200s and 400s, so running miles was something entirely new for me. However, after a few days, she convinced, and as nervous as I was, I went to run with the team.

I can’t tell you how wonderful it was running with a group, the camaraderie these women shared was amazing. The fun they were having, while they were running, was inspiring. I wanted to continue to be a part of this community! 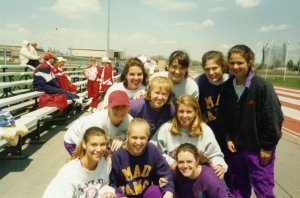 I started to run with them and when we were done getting in the miles, they would go to the locker room, talk to the coach, etc. etc. and I would go back to my dorm room, shower, and meet them for dinner.

One day, when we were finishing up a run, the track coach approached me and asked what I was training for. I told him the Indianapolis 1/2 Marathon. He told me that I should continue to run with the team, and not only that, but a great way to get in shape for the 1/2 would be to run the 10k in the conference meet. Absolutely, not!! I had never run more than a lap around the track in a meet and there was no way I was going to put myself out there at a college meet and run a 10k!! The meet was only a week or two away, and somehow Coach convinced me to run.

The day of the meet, I was a nervous wreck. I didn’t know what to expect. One of the girls told me just run and don’t look at the lap counter. How could I not look at the lap counter! It was right there at every turn and it was so obvious when they would flip it over to show how many laps were left. Despite that, the race felt great. It was exhilarating being back on the track and competing. I didn’t win the race, I didn’t even come in second or third, but I did post a time that qualified me for the National Meet the following weekend. Which just happened to be the weekend of the 1/2 marathon.

It was obvious that I would run in the National Meet. I would never get the chance to compete in a college meet again and there would be more 1/2 marathons to run later. When I ran the 10k at Nationals, it was very, very challenging. I wasn’t recovered from the conference meet. I had teammates on the side who were encouraging me to run hard and race well. However, if one of those teammates had said, “It’s okay, you look tired, you can stop if you want too.” I might have very well given into that! It was brutal! But, I did finish. And, despite a race that didn’t feel great it was still an amazing feeling to compete and push myself beyond my limits, and cross the finish line.

You can imagine my surprise, when I went to get my mail a week before graduation, and there was a track letter for me! I ran in only two track meets, 48 laps, and lettered in track!

I have to give credit where credit is due. The God of second chances and more. Even when we are unfaithful He is faithful!! 48 laps around the track, a second chance to make up all those 200s and 400s I had missed out on in high school. I was thankful to be given a another chance to train and race with the companionship of encouraging teammates, something I had given up years before.

Now, that I had graduated from college I was starting another new chapter in my life, but one thing I knew for sure was that running was going to continue to be a part of it.