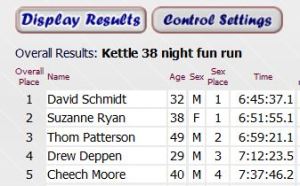 Because I knew a couple of people who were running one of the Kettle Moraine Endurances races the challenge entered my mind, “Could I run more than a marathon?” Especially when, in the last couple of months,I haven’t been training specifically for the marathon and/or beyond. Why not try it? Originally I inquired about running the 100 mile run or the 100k, but than thankfully, somewhat of my sanity came back, and I figured that would be too much mileage without proper training and I could very well end up injured.

So, my thoughts turned to the 38 mile FUN run. Since, I just celebrated my 38th Birthday a few days ago I thought it would be interesting to see if I could get through a 38 mile run. When else would I get the opportunity to run my exact age in miles!? ( :

Yesterday afternoon, on a whim, I drove to La Grange, Wisconsin, thinking I was going to start the run at 8pm and hope to finish between 2-3 in the morning. Sleep a couple of hours in my car and then drive back home. However,  When I arrived I was told I could start before 8pm and opted to begin around 6:20 in the evening.

I was equipped with everything I needed. I had just had a full bottle of UR Driven (my all natural sports drink sponsor) about an hour before I started and a protien shot. I also was carrying a water bottle of UR Driven, endurlytes, my head lamp, and one tiny, tiny light on the top of my shoe. Since, I was carrying a bottle in one hand I opted to leave my hand held flash light in the car in order to leave my other hand free. (Dumb idea)

I started out at a nice controlled pace, running alone, although I was passing runner’s going in both directions, so not entirely alone on the course, but running by myself the first 16-17 miles. I felt great. I kept consuming the UR and taking my endurlytes and did not concentrate on the distance I had accomplished and the distance I had left to go.

I finally got to the check point on Highway 12 where my drop bag was located. I decided I felt great. I didn’t need to mess with my shoes, socks, or clothes, so all I did was mix up another bottle of UR and was about to go on my way when one of the crew manning the aid station asked if I had a light. “Sure do! My head lamps wrapped around my water bottle right now, but I plan on using it pretty soon.” In which he responded, “You’re defintely going to need it.” He told me the trail was going to become more technical, with lots of rocks and roots sticking out of the surface. He said, I needed to be sure to pick up my feet and watch my footing carefully! “Will do!” And I set off again.

At first the trail wasn’t that dark but I could feel the dark encroaching on my quickly and figured I better put my head lamp on and be ready for the blackness. The light immediatly came on and just as immediatly went out. What the heck!? This lamp was brand new with brand new batteries in it. It can’t possibly NOT work. I checked it at home and it worked. I checked it in the car and it worked. However, lesson learned, I needed to check it at the aid station before I went out into the dark, wooded path. At least then, if it didn’t work I could have put in my back up batteries.

And now, all of a sudden,  I’m alone and I’m in the forest, and it’s going to be dark, and I’m ALONE. Ok, don’t panic, turn the tiny tiny light on my shoe, at least that’s something.  Even the smallest light can brighten the darkest night, right? Well, not so much. I told myself, just think of Katniss, from the Hunger Games, running through the forest, unafraid yet sometimes very afraid..and, oh, wait she’s equipped with a bow and arrows. I’m missing the bow and arrows and that’s just not good. I’m not as cool and calm, I’m more of a nerd so forget that image. : )

Anway,  it was frustrating because I definitely had to slow my pace and be very careful, making sure I was seeing the trail markings on the ground and hoping that I would soon come upon somebody with a light. And with about 2 miles to the aid station I did just that. He was running the 100 mile run so I did have to slow my pace quiet a bit, but that was okay. I’d rather take it slow, be able to see, and not get injured! When we came to the aid station he sat down for a well-deserved rest and I was anxious to get going again. That’s when I saw Alec (who was running the 100 mile run) and Brian (who also came out on a whim to help pace Alec and get in some mileage.) I hung back with these guys until the next big aid station and was very thankful when Alec gave me an extra head lamp. Alec told us we could both go ahead and he would be back to running shortly after we set out again.

The rest of the run Brian and I talked the entire time. In fact, I don’t think there was ever a lull in our converstation. And what was more amazing is that we kept feeling good. I figured as we drew closer to the end, mental and physical fatigue would eventually start to set in. But, it never did and when we saw that we only had 5 miles to go, then 3 miles, then 2, and finally 1 we wondered how on earth we could still be talking, smiling, and laughing. It was incredible. I certainly didn’t feel like I had just finished 38 miles. The only thing I can attest this too is that I went out at a very easy comfortable pace and never became depleted and I stayed properly hydrated and fueled the entire race.

I’m not sure if finishing with such a good feeling will be in my favor. Because of course, I’m already thinking that If I can do 38 miles and feel that good, why not try 50, and if I can make 50, then whose to say I can’t do 100! Hmmm…..I’m always up for a new challenge!

Here are the results from the 38 mile run. It kills me that I had problems with my head lamp b/c if I didn’t I might have been able to beat the first place male finisher. Well, I guess he just better watch out next year…( ; 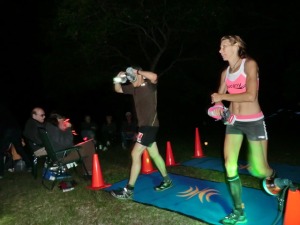 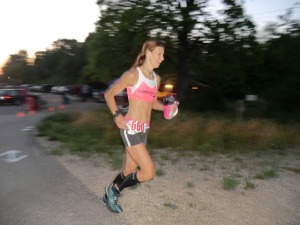